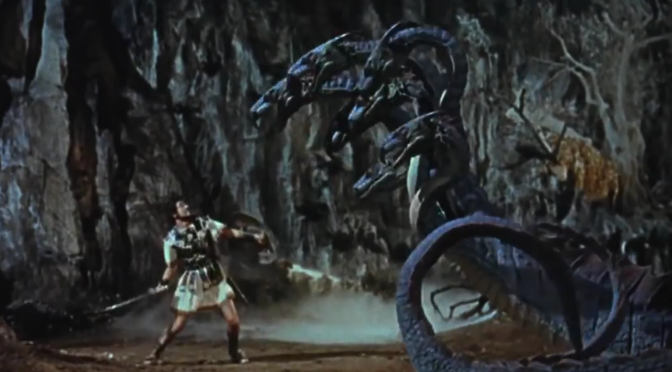 This has been a very long week, so what a better plant than another cult film for Sunday afternoon at home? After Clash of Titans and The Mummy we return to colour and Harryhausen in the film he considered to be his best, Jason and the Argonauts.

For those of you not familiar with the myth, this is the story of Jason, rightful but deposed prince of Iolcos, on his quest to recover the Golden Fleece from the end of the world, which at that time was the semi-mythical land (now some scholars place n Georgia) of Cholquis. Well, his adventure and that of some of the most important heroes in Greece, such as Herakles, Peleos, Butes, Castor and Polydeuces, Calais and Thetes, Meleager and, the only woman of the crew, Atalanta. The crew members vary with each version of the myth, but it is clear this was an all-start adventure for the Greek heroes, and the most important common enterprise before the Trojan War.

The film was released in 1963, directed by Don Chaffey, and produced by Charles H. Schneer, with Todd Armstrong as Jason, although it was dubbed by Tim Turner, Nancy Kovack as Medea, dubbed as well, in this case by Eva Haddon, Niall MacGinnis as Zeus and Honor Blackman in the role of Hera, an actress better known for her role as Pussy Galore in 007 Goldfinger. And of course a good number of secondary actors with not many lines, but with faces you will encounter time after time in this kind of cinema.

This is a story that always fascinated me for several reasons: the adventure, the mission at the end of the world and, especially, it has a ship! This is the most maritime heroic cycle of all, and for those who know me that is a big call. Another issue that fascinates me about it is the strong criticism that the character of Jason receives. I recall defending him in a class on Greek literature where he was portrayed as a good-for-nothing that depended on everybody else for achieving his goals, especially from Medea that seems to do all the hard work. It is indeed that only thanks to Medea Jason is able to recover the Golden Fleece, but I never quite understood why he is considered no more than a naïve youngster. He is actually not a demigod, so he does not have the strength of Herakles or the invulnerability of Achilles. Other heroes such as Perseus or Bellerophon can only succeed in their deeds to the help of divine beings, and we should not forget that Medea, despite mortal, is a powerful witch. I think that, sadly, the reason is the presence of “feelings” in the tale. The best, most complete version of the story is recorded in The Argonautica of Apollṓnios Rhódios (first half 3rd c. BCE). The Hellenistic period is a time of great transformations in the Greek literature, and the works acquire a more personal tone. I think the Jason of Apollṓnios reflects no more no less the current style of the period, where heroes do not need to be killing machines. This is of course my interpretation of the poem, but I think the general approach does not only fail to understand the context in which the work was composed but also diminishes the role played by Medea, in a rather misogynistic interpretation of the myth: Jason is so pathetic that he needs the help of a woman. I do not believe that is what Apollṓnios had in mind at all.

Coming back to the film, one of the main issues dealing with the Argonautica is how to explain to the audience that Herakles (Hercules in its latinised version) must leave even before crossing to the Black Sea. It is not expected that the great hero, at least the most widely known for the general public, must leave the adventure in medias res. The sequence of Talos feels somehow confusing and excessively long, but what effects! Remember, this is a film of 1963, and the special effects were the craftsmanship of a genius, Ray Harryhausen, whose work we already reviewed in another classic The Clash of the Titans. Most of the work was done in stop motion, and despite the decades passed his work is just incredible. The sequence of Talos grabbing the ship is cool, how the harpies integrate with the net very cool, the dragon protecting the fleece awesome. But the battle of the skeletons is just the work of a genius. The sequence took over three months of work, and I think it still is an iconic image everybody remembers from its childhood, even if they do not even recall the film.

Just compare the effects on this film with another Jason and the Argonauts from 2000. The computer looks fancy, but there is a lack of “reality” of “physicality” only the stop-motion achieved. You know the dragon is only a model, but you were sure you were able to touch that model.

Another favourite aspect is the role the Olympus and the gods play in film, as a secondary but important scenario. The idea of Zeus and Hera playing in the tabletop of human affairs is one of the most original ways I remember to integrate the gods in the narrative. One thing I am also always curious about these films is that they seemed not to be able to avoid the mysteriously exotic dance number somewhere in the middle of the film. In this case is Medea performing what seems like an ecstatic dance in the temple of Hecate, with movements of the camera that seem to

represent some kind of drug-influenced ritual. The use of psychotropic drugs is a constant at least in the versions of the myth of Apollṓnios, so curious as it seems is not such a long shot.

Can we consider this a peplum film? Greek films, specially mythological ones, usually fit better into the adventure and fantasy genres. The narrative of the myth is adapted to the time the film was made, especially the suppression of the sexually driven episode of Lemnos. And despite this I think it gives female characters an important role, always one step further from the male characters. Men do their killing and so on, but Hera and Medea are the puppeteers puling the strings.

Before ending this entry a couple of things to check if you like the story. The first is Atalanta, a series of comics by Belgian author Crisse, better know perhaps for the Crystal Sword. It follows the story of the heroine Atalanta from her infancy to her participation in the recovery of the Golden Fleece. The series is still ongoing and although it is sometimes difficult to find editorial information on the publications, it is a must have in your bookshelf. It has a spin-off called Atalanta’s Odyssey, but I am afraid you need to read French to be able to enjoy it. 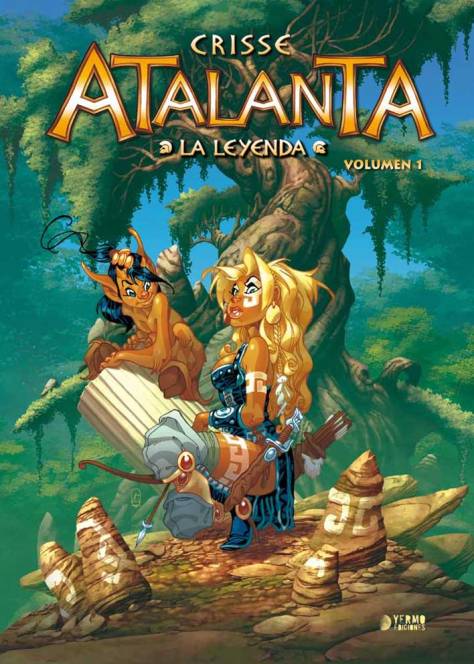 The second is a rather geeky thing. Some time ago I found a game that allows you to live your own sailing adventure. (Your Name Here) and the Argonauts, that is the name of the game, is a free print and play game from 2012 that allows you to assemble a crew, fight monsters and recover treasures from the gods. Easy to learn, easy to play and, believe it or not, you and your enemies level up at the end of each victorious game, so you can replay the game once and again. And again, it is free! Just follow the link and dowload it.